Prof Sunday E. Ododo gets Honorary Citizenship of Kiriland by the Olukiri! 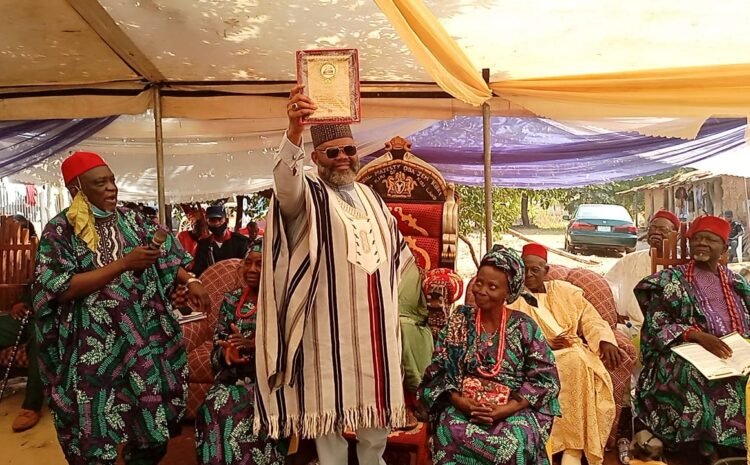 As parts of activities to mark the 20th anniversary of the Olukiri, Olu Jem Kiri of Kiri Kingdom, the GM/CEO of National Theatre, Prof. Sunday E. Ododo, fsonta fta, fsna, fana, FNAL was bestowed honorary citizenship of Kiriland by the Olukiri in a celebration replete with reenactment of the rich history and culture of the Kiri people including musical performances, dance, dance drama and special cuisines.

The award of honorary citizenship which was presented on the 24th of December, 2021 in the Palace of the Olu Kiri was in recognition of his (Prof. Ododo’s) over 30 years of service to the people, culture and overall development of Kiriland.

Speaking on the epochal award, Prof. Olu Obafemi, NNOM said “Prof. Ododo has visited Kiriland over 30 times and has helped to propagate Kiri culture as embodied by Ajon.” The National Order of Merit sole Awardee 2018 (Prof. Olu Obafemi) reminded the gathering that Ododo has served Ajon Players in all capacities from player to troupe manager and helped it to tour the world.

In order to concretize the citizenship, the Olukiri gifted Prof. Ododo a large piece of land with the instruction that more is available on request- thereby effectively ‘making him a son of the soil’. He is the first non indigene to be so honoured along side Emeritus Professor Femi Osofisan, FNAL, NNOM.