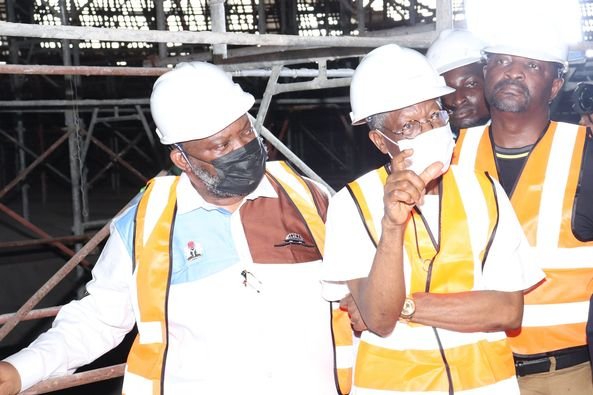 Alhaji Lai Mohammed, the Honourable Minister of Information and Culture and the Governor of Lagos State, Mr. Babajide Sanwo-Olu ably assisted by the GM/CEO of National Theatre, Prof. S.E. Ododo, fsonta, fta, fsna, fana, FNAL played host to the Hon Minister of Youths and Sports, Mr. Sunday Dare and the Governor of Central Bank, Mr. Godwin Emefiele on an inspection of the ongoing renovation, revamping and the rehabilitation of the National Theatre. The Saturday 2 April 2022 inspection which is the second of such since the project started follows the December 12, 2021 inspection which was on the day of the Command Performance and grand finale of the National Theatre Festival of Unity. Mr. Rotimi Finih the Project Manager led the government delegation on the technical aspects of the inspection.

During the Press Conference which was coordinated by the Chairman of Bankers Committee, Mr. Herbert Wigwe, the Hon Ministers of Information and Culture; Youths and Sports, Governor Babajide Sanwo-Olu and Governor of Central Bank all said they were impressed with the level of work done so far. The lead Contractor, Cappa and Dal’barto assured that by November this year the New National Theatre will be ready for commissioning; it is likely to host an international event before the end of the year.

The Minister of information and Culture, Alhaji Lai Mohammed speaking to press men after the tour praised the Bankers Committee for providing the funds for the renovation and Lagos State Government for the enabling environment which is aiding the speed of the work. He also assured Nigerians that the renovation of the National Theatre will be completed by this administration.