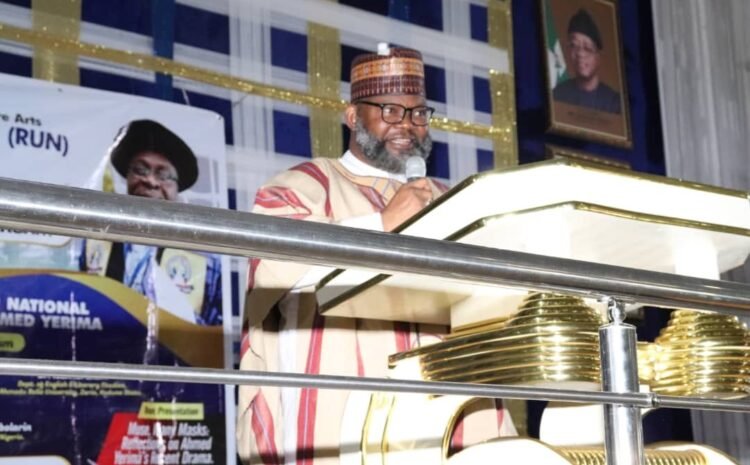 Activities for the celebration of the most performed playwright in Nigeria and on the National Theatre stage, Prof. Ahmed Yerima, former Director-General of National Theatre and National Troupe of Nigeria, who clocks 65 started today at (RUN) Redeemer’s University, Ede, Osun State, today 6th of May 2022. The first international conference on Ahmed Yerimah’s Theatre/ Drama with the theme: The Role of Drama & Theatre in National Integration 5th – 8th, 2022. The event started with presentation of papers by scholars and theatre administrators including the GM/CEO Prof. Sunday E. Ododo, fsonta, fta, fsna, fana, FNAL who presented a paper titled “National Theatre after Yerimah”, it was during this presentation that Prof. Ododo emphasized that Prof. Yerimah keeps impacting human development asides from his contribution to national integration through his artistic works.

The stellar cast of speakers included convener, Dr Stephen O. Eyeh, Prof. Ranti Julius Adeoye – the Co-host, Prof. Anthony Enisa Akila – Chief Host, and Host (HM) Prof. Afolorunsho Dairo. Prof. Yerimah was described as an enigma whose giant shoulders provided the platform for one of the speakers. Another spoke glowingly of how Yerimah’s drama/ theatre always contained seeds of national integration as he aptly use aesthetics, social-political and esoteric themes in his drama; still, another speaker said Yerima has authored many works and his works are categorized into 2 which are; ‘language and literature’ with satiric language, humour, political culture, ridicule, code-switching and code-mixing which makes him (Yerimah) a reader-friendly author.

Prof. Ododo was able to show a corollary between the National Theatre under Yerimah between 2006 and 2009 which was a period of performances and theatre for the audience at little cost and the present day National Theatre steeped in the performative essence of the theatre for ‘edutainment’ preservation, presentation and preservation of the cultural heritage of Nigeria; always the performer, the GM/CEO led the audience in a sing-along in tribute to Theatre Art, which he described as the best course to study – an assertion the audience acquiesced to