Cultural Diversity for Dialogue and Development: Unity in Diversity – lecture by prof Ododo at the World Cultural Day event 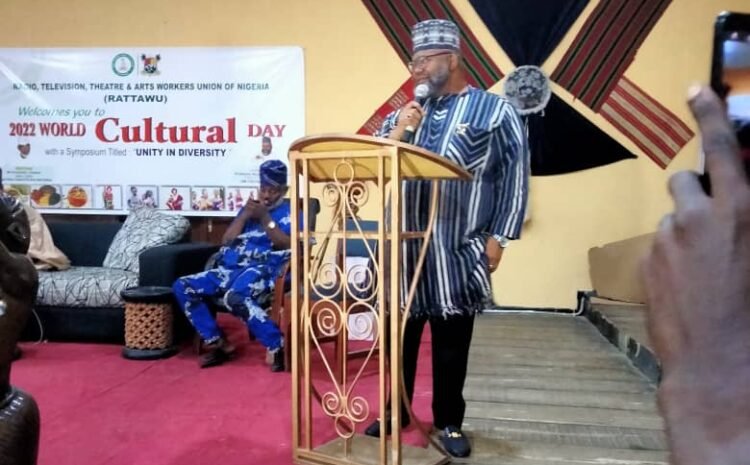 As the world celebrates Culture today 21st of May yearly, the GM/CEO of the Headquarter of Culture in Nigeria was guest speaker at an event organized by RATTAWU Lagos State Council. The World Cultural Day 2022 which held at the Lagos State Council for Arts and Culture in Ikeja had as chief host Mr. Komolafe Oladunsi, Director Art Council, royal fathers from the Ojora kingdom in attendance, the Artistic Director of National Troupe of Nigeria, Alhaji Ahmed Mohammed Ahmed, NLC Lagos Council Com. Agnes Sessi in attendance.

Prof Ododo, fsonta, fsna, fta, fana, FNAL presented a paper on the theme of the event: Cultural Diversity for Dialogue and Development: Unity in Diversity in which he stated empirically that there are cultural universals across the world, one of which is respects for parents. He further postulated that it is “through dialogue and the recognition that culture is not static but rather it (culture) continues to evolve…a culture without external contact will soon go into extinction – it this realization that can bring mutual understanding which leads to peace and ultimately development.”

Children from the Lagos State Art Council were superb in their cultural dresses as they depicted different Nigerian cultures in their performance ensembles to a very delighted audience.

The Radio, Television, Theatre and Arts Workers Union (RATTAWU) members and the others commended the erudite scholar for his support to the union all the time.