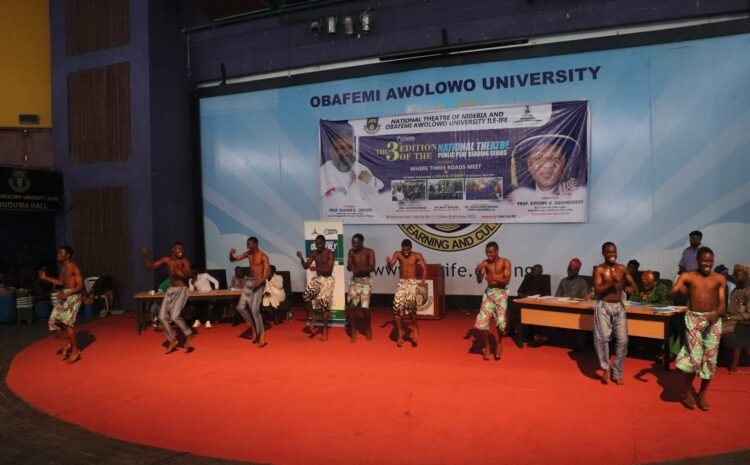 As advertised the Obafemi Awolowo University Ile-Ile hosted the third edition of the National Theatre Play Reading Series on Saturday 4th of June 2022 inside the Oduduwa Hall of the University; the first two editions had earlier been held in National Theatre, Lagos (August, 2021) and Nasarawa State University (March, 2022). The Play which was read is “Where Three Roads Meet” written by Jesutofunmi Testimony was the choice of the National Theatre Play Reading Assessment Committee. Indeed, the collaboration of the Headquarters of culture in Nigeria (National Theatre) and O.A.U Ife (Learning and Culture) produced a potpourri of breathtaking and captivating renditions of folklore, that evoked nostalgic feelings in the older members of the audience and excited the younger audience due to the fervour of the young performers which further enlivened the event. Three cultural troupes were responsible for these performances that brought the audience to its feet: Esin Oye Performing Troupe; Part 1 students, Department of Dramatic Arts, OAU Ile-Ife, and Fikayo Group of Schools. Involving the secondary school students in the play reading experience is an investment in the future which will no doubt inspire the next generation of creatives in Nigeria.

In what was a first of its kind the Vice-Chancellor of the University, Prof. Eyitope Ogunbodede took part in the reading of the play text as well as the GM/CEO of National Theatre; a former Artistic Director of the National Troupe of Nigeria, Mr. Akin Adejuwon; Prof. Dayo Sowande (the Chairman of Deans); Prof. Jimoh Farinde (Dean of Agric Science); and Dr Saheed Amusa (Vice Dean, Faculty of Arts); the audience were thrilled to hear and see these men of letters as different characters created by the playwright with elocution suited to the interpretation of their characters.

At the end of the reading and “constructive deconstruction of the play text” the playwright was presented an award by the GM/CEO of National Theatre ably supported by the VC, with the proud parents of the 200L Jesutofunmi Testimony also in attendance.